Holly Morgan was born in Seoul, Korea. She grew up an Army brat—and there’s a little Georgia peach in her. Back in 1991, Holly was working at K-Mart and going to college when she was approached by a radio program director in Donalsonville, GA. “I had no idea that day would change my life forever,” says Holly. “I had no idea I would become a DJ. But he believed I was very unique, and I got my first radio job.”

When in the Mix 94.9 studio, she always has plenty of snacks, which probably isn’t a surprise to regular listeners and why she has the nickname “Snack Queen.” In fact, she describes herself in two words: food and fashion. As Mix’s resident fashionista, Holly has an impressive purse and shoe collection.

Holly is married to B-105’s Grover Collins (“We go like peanut butter and jelly. We love each other even when we’re hungry!”). They raised two children, Sophia and Joey. Pet lovers, they have two dogs, Benni and Faye, and reside in Florence, KY. Adopt a shelter pet at My Furry Valentine!

Join Mix 94.9 at My Furry Valentine at the Sharonville Convention Center! It’s the largest adoption event in the Tri-State where you can help a puppy, kitten, dog, cat or... 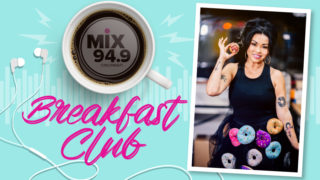 Start your weekday mornings on a good note with Mix 94.9’s Breakfast Club with Holly Morgan! Holly Morgan will start your day on the right side of the bed...